Until now we’ve worked with Python either directly via the interactive Python console, or by writing Python programs using a text editor.

However, there are other ways to work with Python. Jupyter is a set of tools originally developed to make it easier for scientists to work with Python and data. It allows you to combine interactive Python exploration with prewritten programs and even text and equations for documentation.

Jupyter isn’t a different programming language, it’s just a set of computer programs for working with the Python language. 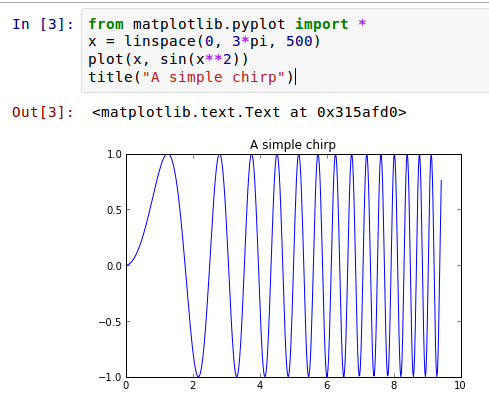 (This is just an example of what Jupyter Notebook can do, don’t feel like you need to understand it just yet! If you want to type it into Jupyter Notebook later on, type the special command %matplotlib inline before you start - there’s an explanation coming up in the Charts chapter.)

There are a number of ways to install Jupyter Notebook.

If you’re using OS X or Windows, we recommend you download and install Anaconda, which is a free bundled installer of Python together with many other useful tools (including Jupyter Notebook.)

Anaconda comes with its own version of Python 2.7, Jupyter Notebook, plus other libraries like matplotlib and a package manager (“conda”) that you can use to install other packages or other Python versions.

If you’re using Linux, Anaconda is available as an option but we recommend you try to install the programs using your Linux distribution instead (see under “Alternative Options”, below.)

Anaconda (described above) is the easiest option for this workshop. There are some other installer options that you can test out if you’d like to try something different:

(If you’re on OS X you may need Xcode to compile dependencies.)

Anaconda and some of the other installers come with Python version 2. You may have been using Python version 3 up until now, this is the version that the Introduction to Programming workshop encourages you to use.

The Python world is slowly migrating towards using Python 3 for everything. Jupyter is available for both 2 & 3, but Anaconda comes with Python 2 as it includes some components which are still Python 2 only.

Python 2 and Python 3 have some minor incompatible differences in language syntax. The programs shown in this workshop are designed to work with both, but if you find some code that doesn’t work (but perhaps works on your neighbour’s computer) then this may be why.

You interact with Jupyter Notebook using your web browser. The Notebook program creates a “web server” locally on your computer that you then connect to.

On Windows, you can find a launcher for Jupyter Notebook under Anaconda in the Start menu.

On Linux or OS X, you can start Jupyter Notebook from the command line. First open a terminal window, use ‘cd’ to navigate to the directory where you want to store your Python files and notebook document files. Then run this command:

A browser window may automatically open showing the Jupyter Notebook interface. If it doesn’t open, you can copy-paste the “http” address from the output and paste it into your browser.

Even though you’re interacting with Jupyter Notebook using your browser, Notebook is running right there on your computer in that window. Only you have access to it.

In your browser, click the “New Notebook” button and a new notebook will open up.

The empty box at the top is the first “cell” for entering Python code.

Try typing something like print("Hello World") into the cell. To run the code in the cell and see the output, click the Run button (play icon) on the toolbar, or type Shift-Enter:

You’ll see that whenever you run a cell, a new empty cell appears where you can enter another set of Python statements. Try assigning a variable. Let’s make another shopping list:

When you Run this cell you won’t see any output, but behind the scenes the variable “shopping list” has been assigned.

We can see this by making a third cell to print the contents:

You can do anything with Jupyter Notebook cells that you’d do with normal Python code. As you build up the notebook full of cells you create a history of the things you’ve done and the results that were printed.

When Jupyter Notebook starts up it prints a line like this:

This is the directory that it was started from, and it’s the working directory for loading Python files, text files, etc.

It can be helpful to make sure this directory is the directory where you plan to keep files related to your work.

On Windows with Anaconda this directory is called “Jupyter Notebooks” inside “My Documents”, and is created when you install Anaconda. On OS X, Linux or other Windows installations it’s up to you which directory you use.

If you’re launching from the command line, you can ‘cd’ to this directory before you launch Notebook.

If you’re using the command line on Windows, you can use Explorer to find your directory, then hold shift+right click. The context menu that comes up should have an option to “Start a command prompt here”.

After you download the Notebook file, move it into your Jupyter Notebook working directory and then choose File -> Open in Notebook to open it.

That Notebook contains some additional code, and some suggestions for changes you can make by going back and editing the existing files. Take a few moments to play with the Notebook - rerun the cells, edit the cells to change them, don’t be afraid to break things!

Into a cell and running it. This loads up a new cell containing the contents of myprogram.py.

Test this feature out by loading one of the scripts you wrote during the recap session. You may have to specify the full path to the script file, depending on the directory Jupyter Notebook started up from.

There is one other useful built-in tool for working with Python files:

This will run myprogram.py and load the output into a Notebook cell.

Other Ways to Run Jupyter

Doing the workshop without Jupyter

Tried out Jupyter Notebook but don’t really like it? No problem! The rest of the workshop can be completed without using Jupyter Notebook at all, feel free to go back to the Python coding tools you were using already.

Time to give Notebook a real workout! The next chapter is Working With Text Files